The online version of the open-access textbook Minimalist Data Wrangling with Python by Marek Gagolewski is, and will remain, freely available for everyone’s enjoyment (also in PDF). Any bug/typos reports/fixes are appreciated. Although available online, this is a whole course; it should be read from the beginning to the end. In particular, refer to the Preface for general introductory remarks.

Python was designed and implemented by Dutch programmer Guido van Rossum in the late 1980s. It is an immensely popular object-oriented programming language particularly suitable for rapid prototyping. Its name is a tribute to the funniest British comedy troupe ever. Therefore we will surely be having a jolly good laugh along our journey.

We will be using the reference implementation of the Python language (called CPython), version 3.9 (or any later one).

Users of Unix-like operating systems (GNU/Linux1, FreeBSD, etc.) may download Python via their native package manager (e.g., sudo apt install python3 in Debian and Ubuntu). Then, additional Python packages (see Section 1.4) can be installed by the said manager or directly from the Python Package Index (PyPI) via the pip tool.

Users of other operating systems can download Python from the project’s website or some other distribution available on the market.

JupyterLab is a web-based development environment supporting numerous programming languages, see Figure 1.1. It is definitely not the most convenient environment for exercising data science in Python (writing standalone scripts in some more advanced editors is the preferred option). Still, we have chosen it here because of its educative advantages (interactive, easy to start with, etc.).

More advanced students can consider, for example, jupytext as a means to create .ipynb files directly from Markdown files. 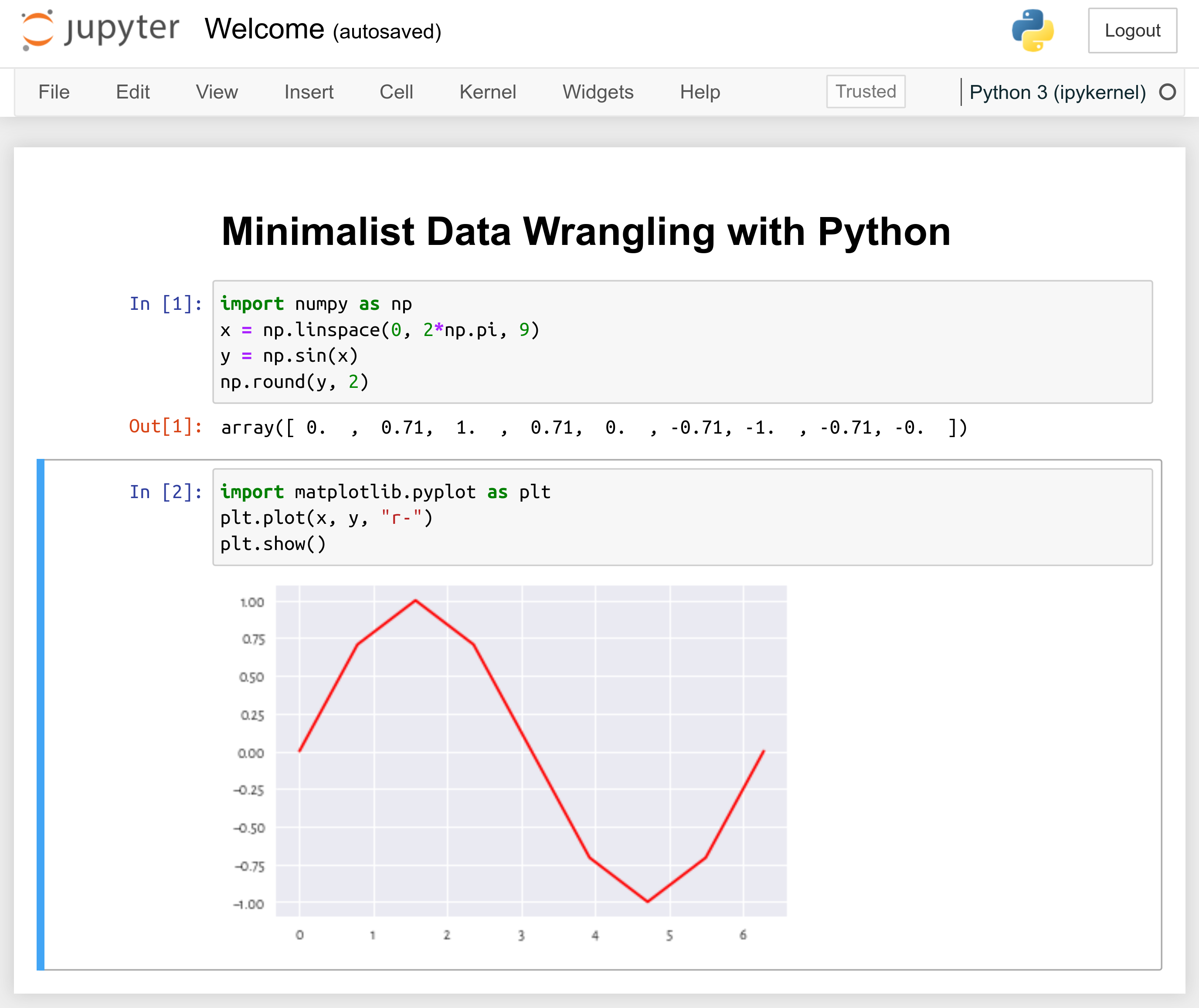 Figure 1.1 JupyterLab at a glance

In JupyterLab, we can work with:

Head to the official documentation of the JupyterLab project and watch the introductory video linked in the Overview section.

How we launch JupyterLab will vary from system to system. Everyone needs to determine the best way to do it by themselves.

Some users will be able to start JupyterLab via their start menu/application launcher. Alternatively, we can open the system terminal (bash, zsh, etc.) and type:

This should launch the JupyterLab server and open the corresponding web app in the default web browser.

Some commercial cloud-hosted instances or forks of the open-source JupyterLab project are available on the market, but we endorse none of them (even though they might be provided gratis, there are always strings attached). It is best to run our applications locally, where we are free to be in control over the software environment.

Here is how we can create our first notebook.

Time for some more cells.

Change print(2+5) to PRINT(2+5), execute the code chunk and see what happens.

In the Edit mode, JupyterLab behaves like an ordinary text editor. Most keyboard shortcuts known from elsewhere are available, for example:

ESC and Enter switch between the Command and Edit modes, respectively.

So far, we have been playing with Code cells. We can convert the current cell to a Markdown block by pressing m in the Command mode (note that by pressing y we can turn it back to a Code cell).

Read the official introduction to the Markdown syntax.

Apply what you have learned by making the current Jupyter notebook more readable. Add a header at the beginning of the report featuring your name and email address. Before and after each code cell, explain (in your own words) its purpose and how to interpret the obtained results.

Learning, and this is what we are here for, will not be effective without making notes of the concepts that we come across during this course – many of them will be new to us. We will need to write down some definitions and noteworthy properties of the methods we discuss, draw simple diagrams and mind maps to build connections between different topics, check intermediate results, or derive simple mathematical formulae ourselves.

Let us not waste our time finding the best app for our computers, phones, or tablets. The best and most versatile note-taking solution is an ordinary piece of A4 paper and a pen or a pencil. Loose sheets of paper, 5 mm grid-ruled for graphs and diagrams, work nicely. They can be held together using a cheap landscape clip folder (the one with a clip on the long side). An advantage of this solution is that it can be browsed through like an ordinary notebook. Also, new pages can be added anywhere, and their ordering altered arbitrarily.

1.4. Initialising Each Session and Getting Example Data (!)

From now on, we assume that the following commands have been issued at the beginning of each session:

The above imports the most frequently used packages (together with their usual aliases, we will get to that later). Then, it sets up some further options that yours truly is particularly fond of. On a side note, for the discussion on the reproducible pseudorandom number generation, please see Section 6.4.2.

The software we use regularly receives feature upgrades, API changes, and bug fixes. Therefore, it is good to know which version of the Python environment was used to evaluate all the code included in this book:

The versions of the packages that we use in this course are given below. They can usually be fetched by calling, for example, print(np.__version__), etc.

We expect 99% of the code listed in this book to work in future versions of our environment. If the reader discovers that this is not the case, filing a bug report at https://github.com/gagolews/datawranglingpy will be much appreciated (for the benefit of other readers).

All example datasets that we use throughout this course are available for download at https://github.com/gagolews/teaching_data.

Ensure you are comfortable accessing raw data files from the above repository. Chose any file, e.g., nhanes_adult_female_height_2020.txt in the marek folder, and then click Raw. It is the URL that you have now been redirected to, not the previous one, that includes the link to be referred to from within your Python session.

Note that each dataset starts with several comment lines explaining its structure, the meaning of the variables, etc.

What is the difference between the Edit and the Command mode in Jupyter?

How to format a table in Markdown?

GNU/Linux is the operating system of choice for machine learning engineers and data scientists both on the desktop and in the cloud. Switching to a free system at some point cannot be recommended highly enough.